Be A Voter: A Nonpartisan Resource for Election Information 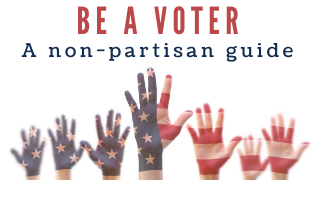 November 3, 2020 is Election Day! There are several items on the ballot this fall. We have tried to compile all the information you will need to be ready to cast your vote!

Due to the Covid-19 pandemic, Bedford County encourages citizens to vote early in person or by mail this year.

Apply online to Vote at Virginia Department of Elections

No Excuse Absentee Voting by Mail

You must apply for a ballot to vote by mail. The deadline to apply is October 23rd. Be aware of mailing times – waiting too close to the deadline may result in your ballot being returned too late.

Call the Bedford County Registrar’s Office at 540-586-7649 to request an absentee ballot
Click here to apply online for an Absentee Ballot at Virginia Department of Elections
You can also track your ballot at this link – when it is mailed to you and when it is received and processed.

Check with the Registrar’s office to confirm your eligibility to vote absentee by mail if you registered recently and have not voted previously. Special federal ID requirements apply to certain first-time voters.

Please note: These are the candidates who qualified for the Virginia ballot by the rules set forth by the state. The names on the ballot will not necessarily be in this same order at the polling place. Voters will only see the offices for which they are eligible to vote on the ballot; for example, voters in Bedford County will not see candidates for Bedford Town Council. Please review your ballot carefully before making your selections.

Virginia Motor Vehicle Property Tax Exemption for Disabled Veterans Amendment (2020): Should an automobile or pickup truck be exempt from state and local taxation if it is owned and used primarily by or for a veteran of the armed forces of the United States or the Virginia National Guard who has a 100% service-connected, permanent, and total disability?

Fact Check – A Project of the Annenberg Public Policy Center

BallotReady – Every candidate and referendum explained.

bestcolleges.com Student Voting Guide – Guiding college students through the process of voting, no matter where they are.

TurboVote – A tool to help you make a plan to vote, including reminders that help you follow through.

This page is compiled and maintained by librarians at the Bedford Public Library System. Links to political parties and/or campaign websites are for informational purposes only and do not in any way constitute an endorsement.

Icons designed by Freepik from Flaticon.